CAMPUS is part of a PHD thesis with the working titel "Integration of Urban Climate information into the Planning Process in Seoul". CAMPUS is a regional climate analysis study adressing aspects of ventilation, air quality and thermal situation which have to be considered by the planning authorities to maintain or improve living conditions in a megacity like Seoul with almost 11 Mio (2006) inhabitants. In the metropolitan region Seoul about 22 Mio (2006) people are living in one of the three biggest metropolitan regions together with Mexico-City and Tokyo. Population density is about 17090 persons per km2. 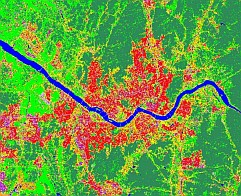 Geographic position of Seoul, South Corea is marked by a latitude of 34°-37° N. Average elevation is 86 m a.s.l.. The climate of Seoul is temperate and continental with wet and hot summers showing monsoons from June until September. Winters are cold compared with other cities on the same latitude. They are also much dryer than the summer also there is some snow fall on about 28 days in average. Temperature differences between the hottest days in summer and the coldest periods in winter are large. Mean precipitation is 1258 mm per year.

The study is based on the concept and methods used in a former regional climate analysis named REKLISO dealing with the same aspects in the Southern Upper Rhine Valley in Germany. For the first time this approach is applied to an Asian city differing in the background of planning processes and goals and therefore in the prevailing city structures compared to the so far investigated middle european areas.

In CAMPUS local- and meso-scale atmospheric processes are also investigated with the help of GIS based models and automated analysis procedures and evaluation methods. The use of spatially distributed data sets homogenous regarding space and time, ensuring constant information density throughout the study area. Scenarios with modified input data using the same spatially consistent evaluation schemes applied during the study may show consequences of projected land use changes for climate and air quality. This might be extremely helpful for such a fast growing metropolitan area enabling planning authorities to carry out a sustainable development concerning both aspects. Sustainable development of the living space for the inhabitants is of special importance with regard to the ongoing climatic change.

The second part of the study is including a comparison of the planning related regulatory systems of Germany, strongly influenced by the legislation of the European Community, and Seoul, South Korea. Corean laws are examined for their possibilities to implement planning objectives related to the aspects mentioned above. Finally, suggestions for potential regulations and planning instruments concerning urban planning but also e.g. landscape planning will be made.