The Federal Ministry of Education and Research BMBF is funding the research program "Research for the Sustainable Development of Megacities of Tomorrow, Focus: Energy- and climate-efficient structures in urban growth centres". The program addresses the issues of fast growing and future mega-cities with the aim of the development of energy and climate efficient settlement strategies reflecting climate change. Casablanca, with about four Million inhabitants at the moment, has been chosen to be one of the investigated cities around the world. The coordination of all mega-city research projects is carried out by the National Aeronautics and Space Research Centre of the Federal Republic of Germany (DLR) PT-DLR on behalf of the BMBF . 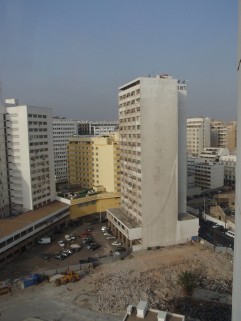 The project was designed for both interdisciplinary and transdisciplinary research. The research contributions of the Chair of Climatology consisted in the "West Africa Reanalysis (NWAR)", which is based on a dynamic downscaling of the NCEP FNL Operational Data Model Global Tropospheric Analyses considering also sea surface temperatures and land cover. Further research tasks include the study of the regional impact of climate change and climate variability. Agro-meteorological information services were created, and the development of multifunctional and climate-efficient space systems for the region was supported. The development of a multifunctional knowledge base promoted an efficient project-wide work. The creation of web-based information services for the environment with focus on the region of Casablanca (Casablanca WISE), which amongst other material also contains research results, as well as the development of an e-learning module "Moroccan Environment" for pupils aged nine to twelve, represent further major contributions of the Chair of Climatology.


Knowledge Base Casablanca (only for UAC project members)

Connecting Urban-Rural Spheres in Casablanca
Edited by Undine Giseke
In: Earthscan from Routledge