The project is funded by the DFG (Deutsche Forschungsgemeinschaft). A glacial lake outburst flood (GLOF) is a sudden release of water from a glacial lake due to a dam failure of either a moraine or glacier ice. GLOFs can cause large numbers of casualties and substantial economic damages by flooding downstream areas. The Hindu Kush Himalaya (HKH) region in general and Nepal, in particular, are largely affected by GLOFs (e.g., Wester et al., 2019).

The Halji village (Figure 1) is home to one of the oldest Tibetan Buddhist monasteries in Nepal. Between 2004-2014, the village has been severely affected by six GLOFs from a glacial lake, which formed episodically during the snowmelt season in the Halji Glacier (Kropáček et al., 2015). This project aims to explore the preconditions of GLOFs, the controlling factor of the temporal variability of GLOFs, and the linkage of GLOF occurrence with large-scale climate change. Together with project partners from Humboldt-Universit ät zu Berlin, the research will be carried out by combining numerical simulations with remote sensing analysis and field observations. 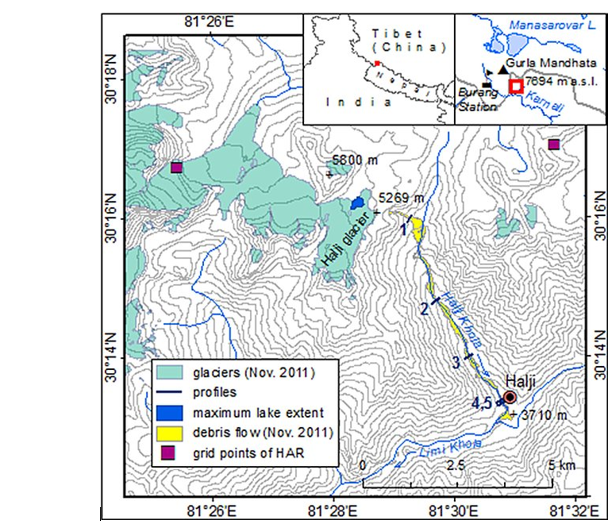 Figure 1. Location of the Halji village and the Halji glacier. The extent of the debris flow was delineated from a high-resolution image from November 2011 available on Bing Maps. Figure taken from Kropáček et al. (2015).
©TU Berlin

Halji field campaign 2022
An automatic weather station (AWS) was installed and replaced in the Halji glacier during the field campaigns in 2013, 2014, and 2018 (Figure 2). In the Halji field campaign 2022, this AWS will be maintained, and a second AWS will be installed at an even higher altitude nearby the Halji Glacier. In addition, drone flights using a light-weight instrument will cover the lower part of Halji Glacier to obtain a centimeter-scale digital elevation model (DEM) on the first and the last day of field work.

Figure 2. Left: AWS nearby the Halji Glacier installed during the Halji field campaign in spring 2018 as replacement of an old one that has been in operation from 12.2013 to 11.2014. Photo: N. Rohrbach. Right: one hydrological year of air temperature and precipitation measured at the new AWS installed in spring/summer 2018.
©TU Berlin

Dynamical downscaling
The already existing HAR v2 10 km data set will be further extended back to 1979. The HAR v2 data set will be further refined to a domain covering the study region at 2 km grid spacing. The extended and spatially refined HAR v2 2 km data set will be compared to field measurements to assess its uncertainty. The HAR v2 2 km data will then be analyzed to determine the triggers and large-scale controls of GLOFs and will also be applied to force glacier mass-balance simulations and snowdrift simulations.

Similarly, snowdrift simulations will be forced by extended HAR V2 2 km data. Parameter values will be derived from AWS data as far as possible, otherwise taken from literature. The goal is to assess the role of snow erosion and deposition processes for blocking the outlet of the glacial lake basin and preserving glacier ice that dams the glacial lake.