Dynamic Response of Glaciers on the Tibetan Plateau to Climate Change 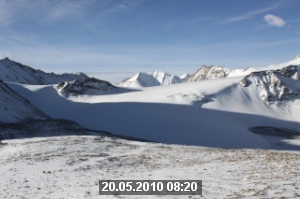 Like Antarctica and the Arctic, the Tibetan Plateau (TiP) is a key area of the globe. It is a determining factor for the Asian Monsoon system, and its glaciers are characteristic elements of the natural environment, forming water resources of cardinal importance for both ecosystems and millions of people living in the surrounding regions.

Within a large consortium of Chinese and German research teams, the TU Berlin, in association with the TU Dresden and the RWTH Aachen focused on the Glaciers evolution and response in the last decades.

Because of their remoteness, relatively few is known about Tibetan glacier's response to climate change: this encouraged further studies of high relevance. The central goal of the project was to improve our understanding of atmosphere-cryosphere interactions on the TiP by adding new data and improved methods combining field studies (meteorology and climatology, glaciology and glacial hydrology), remote sensing and numerical modelling.

Field studies and remote sensing analyses were focused on glaciers in the Nyainqentanglha Mountains near Nam Co, where the Institute of Tibetan Plateau Research (ITP) of the Chinese Academy of Sciences (CAS) operates a research station.